Most, if not all, digital cameras have some sort of plastic cover on top of the LCD. The plastic cover protects and seals the LCD from damage. If the LCD cover gets hit hard enough it cracks. If your LCD underneath looks like someone spilled ink on it, then you’re out of luck, the LCD will need to be replaced as well. 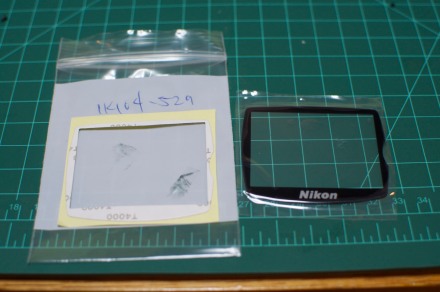 Replacing the LCD window is easy enough. Start by removing the bottom cover. Keep track of the screws. There are a few near the batter compartment that are longer, and one hidden screw beneath a small flap also near the battery compartment. Also don’t forget the ones near the bottom of the lens mount.

The bottom cover should lift off, nothing else is attached to it. Next remove the rear cover. Its got screws on each side, near the eyepiece, and under the SD card door. Remove the SD card. The rear case will not come out with a card installed.

Flip the case over and the remove the screws holding the metal backing plate to the rear case.

Getting the LCD cover out of the rear case can be tricky, the glue is very strong. I pushed the cover from the back and it cracked in two, then I removed the broken pieces.

Remove any of the doulbe sided tape that did nto come out with ehthe LCD cover.

Apply the new tape to the rear case keeping one side of the paper backing on, that way you can press down on the tape getting a good seal.

The new LCD cover should come with some protective film. Remove the film on the back and align one side to the rear case. Avoid touching the uncovered side of the LCD cover, finger prints will be stuck behind the cover FOREVER.

If the buttons fall out don’t worry, they are all keyed and will only go in one spot.

Now put it all back together!